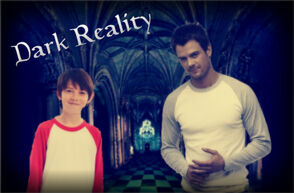 Scenes that were unused and deleted to fit the pace of the episode of Dark Reality.

This wasn't used because in the written script, Samuel possessives Tom at night and kidnaps his parents hours later making the scene out of order.

(Samuel Rejoyces his new body; he sits on the bench, reading a book.)

SAMUEL (in-mind): Jesus, this book seriously needs to get a revamp. or burned. No Burned. Tom seriously liked these books?

(Milisa sits next to Samuel; thinking it's Tom)

MILISA: I was thinking since we're staying here, I'm orgonizing a party for us.

SAMUEL: I have something planned, tonight.

SAMUEL: What do you want?

ANDRE: (on phone) I have some news.

SAMUEL: Okay, but first. I think we have a person on our hitlist.

This scene is the original ending, featuring Samuel's final fate as a ghost on the other side but wasn't used, so the door is still open for Samuel to make an appearance in the sequel.

Basketball Ground, THE OTHER SIDE, NIGHT

(Samuel suddenly awakes, he stands and looks around. Samuel realizes that everything seems very light and dark, he's in the basketball ground and something catches..It's his corpse laying on the ground, dead.)

BOY: (behind him) Samuel Mantix. The Evil ancestor. (folds his arms)

SAMUEL: (bored) And, who may you be? deadboy.

SAMUEL: I'd never of guessed and Whatever.

(Samuel turns around and walks.)

STAN: Don't you want to know whats happening over here?

(He stops and turns around.)

STAN: This place is falling apart.

STAN: Every supernatural spirit is getting dragged off into the oblivion and it's a matter-of time before it's one of us.

SAMUEL: They would never get me.

(Then, a blustery winds picks up. They both look up into the sky and see the clouds opening up revealing a black hole.)

SAMUEL: It won't get me.

(Samuel holds his arms out, closes his eyes and looks up into the sky.)

(Suddenly the blustery winds stop and the clouds close. Everything goes silent..)

STAN: Did that just work?

SAMUEL: Yes, it did. Now let's get down to business. I'm not staying here and I need to get back to the land of the living and a witch to help me.

(Then, the wind picks up again and more powerful than ever.)

STAN: We need to get inside.

SAMUEL: I'm leading myself out of here.

(Suddenly, As the clouds and the buildings behind him tears away; Samuel gets smacked into the air. He smacks on the ground, tossing over onto his stomach.)

SAMUEL: (exhales fastly, scared) What the hell is happening?

Retrieved from "https://gallowshill.fandom.com/wiki/Dark_Reality/Deleted_Scenes?oldid=16649"
Community content is available under CC-BY-SA unless otherwise noted.